the american system of conservation funding

Under the North American Model of Wildlife Conservation (“Model”), fish and wildlife belong to all North American people and are to be managed in trust for their benefit.  In the U.S., the strength of this conservation model is a funding foundation which provides annual funding assurances to state fish and wildlife agencies to support the scientifically based management of these trust resources.  Revenue from the sale of hunting and fishing licenses and from the excise taxes collected on specific hunting and fishing equipment establish the foundation of this “American System of Conservation Funding.”

At the beginning of the 20th century, America's once-numerous wildlife populations were largely depleted.  While the basic tenets of the North American Model of Wildlife Conservation were coming into place, professional and comprehensive management of wildlife was sporadic, due primarily to a lack of reliable funding.  While some state wildlife agencies were benefiting from the sale of hunting licenses, these funds were unreliable without protection from political redirection.  In the 1930s this situation began to change when leaders in the hunting community and the firearms and ammunition industry recognized that if the Model was going to flourish, state wildlife agencies needed a more reliable system of funding capable of supporting the professional and scientific management of wildlife populations.

Their solution was the Pittman-Robertson Act of 1937 (PR Act) which created the Wildlife Restoration Fund.  The Wildlife Restoration Fund was supported by an excise tax paid by the manufacturers or importers of firearms and ammunition.  In addition to the creation of the excise tax, the PR Act required states to create hunting license programs and prohibited states from redirecting revenues from hunting license sales away from their wildlife agencies, which stakeholders were concerned might result from external political influences.  In the 1970s, the PR Act was modified to place an excise tax on pistols and archery equipment (bows, arrows, and accessories attaching to the bow).  Over the 80+ years since passage of the PR Act, wildlife species across the U.S. have rebounded and today’s hunters and the American public benefit from vibrant wildlife populations.

Recognizing the PR Act’s benefits to wildlife populations, the fishing community emulated this system of funding for fisheries management in the 1950s.  The passing of the Dingell-Johnson Act of 1950 (DJ Act) created the Sport Fish Restoration Fund with funding originating from an excise tax paid by the manufacturers or importers of fishing equipment.  Like the PR Act, this fishing equivalent required states to implement fishing license programs and prevented funds from the sale of fishing licenses from being redirected away from the state agency responsible for fishery management.  The 1984 Wallop-Breaux Amendment modified the DJ Act to include excise taxes collected on motorboat and small engine fuels as well as import duties collected on imported fishing and boating related equipment.  This amendment also allowed the fund to capture any interest earned on the fund.  The DJ Act and the Wallop-Breaux Amendment have created a reliable funding source that state fishery agencies are using to support scientifically based professional management of our nation’s fisheries.  Consequently, fishery populations have responded, and both anglers and the American public have benefited.

This American System of Conservation Funding represents a unique “user pay – public benefit” funding cycle that has proven most effective at supporting professional fish and wildlife management in the U.S.  This “Cycle of Success” starts with the funding provided by hunters, recreational shooters, anglers, and boaters.  The funds collected through the excise taxes paid on their equipment purchases and through their purchase of hunting and fishing licenses are the primary source of support for state fish and wildlife agencies.  The state agencies then use these funds to manage fish and wildlife populations and provide public access to these resources.  Improved hunting, recreational shooting, angling and boating opportunities results in expanded equipment purchases, which provides a growing source of funds for future fish and wildlife management.

To help state agency leadership, industry interests and the curious better understand the details of the American System of Conservation Funding, the Wildlife Management Institute and the fishing and hunting industries developed a comprehensive summary of this funding system.  This summary starts with a detailed explanation of the related laws and walks the reader through the collections of the excise taxes, the various manipulations of the funds up until the actual allocation of the funds to the state fish and wildlife agencies.  This effort has been funded through a Multistate Conservation Grant and is available for your use. 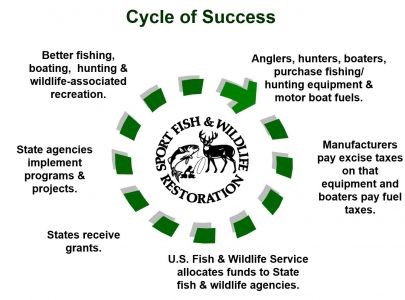